We’ve made it through our first week of Mommy School! I had no idea it would wear me out so much. I’m exhausted! I shared with you all the activities we did on Monday and Tuesday in my first Kitchen Table Classroom post. We practiced cutting with safety scissors, gluing, painting and coloring. We learned the names of the days of the week this week, talked about all of the great things God has made, and started memorizing Matthew 5:16. All in all, it’s been a great week.

After talking about and making caterpillars on Monday, we created beautiful butterflies on Tuesday. I drew and cut out a butterfly from construction paper and he painted one side of the butterfly. Then we folded it in half and pressed the wings together and opened it up to reveal a mirror image of his painting on the other side. He was so excited to see it transform! 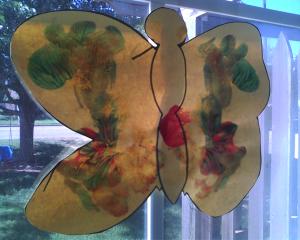 Yesterday we had to run errands, so we didn’t have “school.” That’s one of the perks of learning at home. Today was Super Special Friday. I’ve packed Fridays full of activities from morning until night because Travis will be at football games late into the evening. I don’t want to end up running out of things to do by 5 and still have another three hours until bedtime to fill with something. That’s usually how Little Bug ends up making bad choices and getting himself into trouble. Plus I’m frustrated and feeling out of control. Football game nights are hard around here without a plan.

This morning, he had a special surprise. We made a car out of a cardboard box.

{I apologize that these pictures aren’t exactly awe-inspiring. I had to use my phone because the batteries are dead in my Nikon.}

He absolutely loved this activity! I was so impressed by his creativity. He chose to make his car green, then announced, “It needs a steering wheel!” So we made that out of a paper plate. He looked it over and said, “It doesn’t have windows!” So we made windows. And head lights. And brake lights. And a windshield with wipers! He was so creative. He would peek out the window to check out what our cars have on them and then run back to say his car needed that thing as well. All in all, decorating and making our car took about an hour, which in toddler-time is GREAT!

For the car, I used an empty paper box from my husband’s office, colorful construction paper, Elmer’s glue, markers, tempera paint, and paper plates for the tires and wheel. Very simple and inexpensive craft.

He spent another hour or so playing in and with his car. I pulled him around the kitchen for a while and realized I’m incredibly out of shape. The next stage of our Super Special Friday this afternoon is staging a “drive in” in our livingroom. I borrowed a video from a friend that he hasn’t seen yet and even picked up some popcorn for his snack this afternoon. I think he’s gonna love it!

After we made and played with our car, he wanted to watch a movie which was fine with me because I had some chores to take care of. He put “Dumbo” in the Blue Ray and I asked him if he wanted to put some pennies in his piggy bank. He loves this activity. It works on his fine motor skills but also teaches him about saving. Eventually it’ll get to the point where he earns his pennies but for now we just throw them in a dish and let him put them in his bank. We never purchase impulse buys for him. If we’re out and about and he sees a car or a toy of some kind that he likes, our response is always, “Then save up your pennies!” Often he’ll talk excitedly about what he’s saving for. When the bank gets full, we take it to the bank to have the change sorted and then he can go purchase his prize himself. He seems to really treasure the items he’s purchased himself more than I think he would if things were just handed to him.

Lastly, I formed a little display area in our dining room during the week to show off all of the awesome things we’re learning and creating together. I love walking past the dining room and seeing everything on display. I also lined up some of the picture books we’ve read together this week for him to go and look through as the week goes on. On Monday, we’ll return them to the library and get new books related to next week’s lessons.

I think I’m going to keep all of his drawings, worksheets, and paintings in a large binder. Travis suggested putting them in scrapbooking page protectors. I may do that or I might just triple-hole-punch them all and keep them in a three ring binder. We’ll see. But I don’t want to get rid of these special creations. I’ll let you know what system works best for us when I decide on one. 🙂

Have a great weekend!

One response to “Kitchen Table Classroom: Week in Review”