Jasper, Our Elf on the Shelf

This year with everything going on with baby girl {and me being hit with a horrible stomach bug and then a cold}, Jasper hasn’t been very active. However, last year he was a real stinker, so I thought I would do a post sharing his antics with you to give you some cute Elf on the Shelf ideas for Christmas!

Jasper brought Little an elf hat of his own and made him an honorary Elf.

Honorary Elf Little. He refused to take it off for a week!

Jasper tried to wrap a very special present for us but found himself tangled in the tap and hanging from the tree. What was his special gift? Baby Jesus.

The morning after Little met Santa, Jasper appeared in the small tree we put in his room holding a candid photo of Little and Mr. Claus and a handwritten note declaring, “You met him!”

By switching out the puffy white cotton balls on Santa’s beard with colorful ones!

One morning Jasper found Daddy’s shaving cream and had a little fun.

On the morning of our first December snow, Jasper made a snow angel out of flour on the counter with a flag declaring “First Snow!” 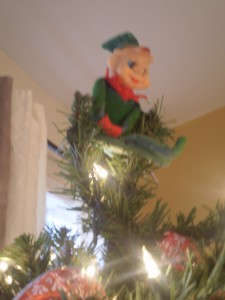 Jasper kicked our Christmas angel off of her post for the day and donned the top of our tree himself.

On Christmas Eve, before flying off to join Santa and work up his magic until next year, Jasper left us a beautiful snow creation in the hallway with over 50 handmade snow flakes and paper chains. Little still talks about the magical moment he woke up to this scene on Christmas morning.

Hope this inspires some of you who might be scratching your heads for that perfect Elf idea! Merry Christmas!