Talking to Children About Adoption

Two big announcements before this post- first, I’m an aunt! My sister in law and brother in law {Travis’s brother} welcomed a baby girl this morning. She’s precious and perfectly healthy and we’re so thrilled to welcome her into our family. And secondly, I’ve added a new feature to my blog. It’s an Amazon bookstore full of hand-picked goodies approved by me.

The books I mention in today’s post are available for purchase in my amazon store, along with many other resources about Attachment Parenting, general parenting, raising kiddos in a Christian home, fun arts and crafts with your kids, Hyperemesis resources, and much more. All purchases made on Amazon {even for items not in my store} contribute a tiny portion to my blog. I’d love it if you could shop from my Amazon store when you’re browsing Amazon and help keep Love Makes a Family going strong! There’s a link to the store to the right of the main blog page.

I think adoptive parents are often intimidated by the idea of talking to their children about their adoption. However, if we make it a regular part of family conversation just as a family would discuss pregnancy, faith, or any other issue that’s important and completely normal to them.

In Sunday School at church this week, we were discussing how to raise our children in a faith-based household. How do you instill in them the belief in the Lord that you hold so dear? You start simple, that’s how. You start by telling them even when they’re as young as Little {even younger, I believe} that they are special in the eyes of the Lord and that God loves them more than anything in the world. You tell them that they were made for a special purpose and that they are important to God’s plan. Just as you wouldn’t start discussing sin and death and fire and brimstone with a toddler, you also wouldn’t explain infant abandonment or birth mother drug addiction to a young child. You start simple.

The best time to explain a child’s adoption is as early as possible. A toddler is not too young to start hearing about the special way in which they came to join their family. In fact, the younger they are, the better it will be for you and your child in the long run because it will normalize adoption and your adoption conversations will come more and more easily the more often you discuss it together. Adoption isn’t something to be afraid of, although Hollywood {and the Lifetime network} loves to play up the concept that no child ever finds out about their adoption into a family without drama and tears involved.

Adoption is a perfectly normal way to build a family, and should be held on the same plane as pregnancy and birth when discussing it with children. The fear that exists in discussing adoption is fear of rejection, fear of confusion, and fear on the part of the child that there is something to the story they aren’t being told. If there is honesty in the home from the beginning, there shouldn’t be any fear or confusion. Children have a difficult time processing the “adult” details of adoption {the choices, crimes, or life circumstances that lead to an adoption decision}, and they shouldn’t be expected to process such heavy topics. If a young child wants to know the why’s of their adoption story {and what child doesn’t} but the details are too difficult to explain to a child, it’s best to simply say that her birth mommy was simply not in a place to raise her forever, but she grew her in her body and then found the perfect family to care for her forever. Emphasize that she is loved and that she was deeply wanted and searched for. The details can come later when she’s old enough to understand and process them.

Perhaps the easiest way to strike up the conversation about adoption and babies with your little one is by sharing a book together. Reading books sparks so many conversations with Little that I otherwise wouldn’t even think to discuss. He also learns all kinds of new words, and I beam with pride when he shares them with Travis later.

So here are some top picks for child-approved adoption books. Some books are about international adoption and some are about domestic adoption. While I lean towards the books about domestic adoption {of course} I think it would be fine to read to him or our future adopted child about international adoption just to understand the different ways families are formed. As I said earlier, all the books here are available for purchase in my Amazon store.

Tell me Again About the Night I was Born

This whimsically illustrated children’s book brings a lighthearted and joyful look into domestic infant adoption through a child’s bedtime story ritual- the story of how she came to join her family. A little girl’s prompting brings about the story of how her parents got the call about her birth and jumped on a plane to meet her at the hospital. The story is written by actress {and Activia representative?} Jamie Lee Curtis, who happens to be an adoptive mom. It brings out the excitement surrounding adoption and illustrates just how magical and wonderful it can be for adoptive parents to rush off to meet their children for the first time. This book can serve as an excellent jumping off point for parents to discuss with their own adopted children about the first day they met. 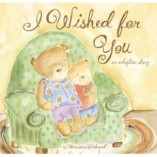 I Wished for You: an Adoption Story

This Mom’s Choice Award Recipient tells the story of Barley Bear and his mama as they sit in their favorite chair and discuss how Barley came to their family. It touches on key questions many adopted children have with sensitivity and love, and creates the perfect starting place for any parent dreading some of the weightier questions surrounding a child’s adoption. The gentleness of this book has provided comfort to many adoptive families who are looking for a sweet starting point in their conversations regarding adoption.

A Mother for Choco

I love this book because it presents the concept of unique families to children without being overbearing with its message. Choco is a little bird on a search for his mother, but what he learns along the way is that families don’t always look alike, but families aren’t about having the same nose {or beak, as it were.} It stresses the importance of love over blood ties and illustrates that home is where they love you, not necessarily just where everyone looks like you. This book is a great place to start with kiddos who are part of a multiracial family either biologically or through adoption. It’s also a good story to read to a sibling who is expecting a new brother or sister via adoption who happens to be of a different race.

In this beautifully illustrated story about an international Chinese adoption, a baby is born to parents who don’t have the money to feed her or care for her in the way they would want. They gently place her in a basket {a la Moses} and float her down the river where various animals {turtles, fish, etc.} care for her, all lighted by the gentle moon. The moon watches carefully over the sleeping baby until she reaches her new adoptive forever family. This story presents the concept to children that they were cared for by unseen forces long before they came to be adopted. For families of faith, I think this would be a great way to introduce the concept that long before you came to us, God was carefully watching over you just like the moon watches over this baby. Some internationally adopted children who spent time as an infant in an orphanage struggle with the idea that they spent time alone, unattended, or uncared for before their adoption. This story can ease their fears that they were ever truly alone, and that they were gently and lovingly cared for by very special people all along the way.

If you have any questions or tips to provide about speaking to children about their adoption, please do share. And, always remember that honesty is best. With some sweet, simple stories, adoptive parents should have no difficulty celebrating with their children the way they came to be a family.