Little had a ball last week playing with shaving cream. I got the idea after I remembered my first grade teacher covering our desks with the soft white foam so we could “clean” our desks. I figured an activity involving shaving cream could clean the top of our dinner table at the very least. I had no idea it would be such a huge hit for him! 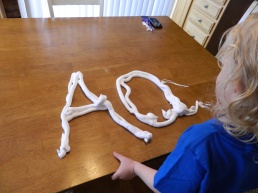 I initially wanted to use the shaving cream as a simple sensory activity to re-introduce the letter of the week before diving into our new lesson. However, the shaving cream turned into the only lesson of the day, which was absolutely fine with me. He had a great time, and that’s part of the fun and flexibility of teaching at home. 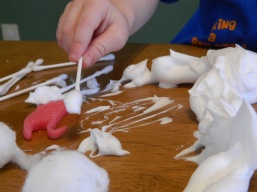 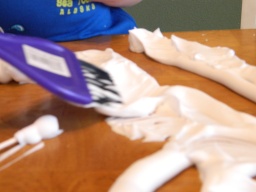 I gave him q-tips, cotton balls, sponges, foam brushes, and a brush that’s used for applying dye to hair. It’s stiff and made really neat tracks in the shaving cream when he dragged it through. 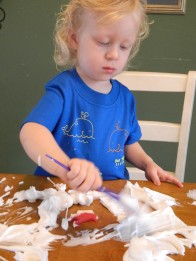 As he made little peaks with the foam, he said, “It’s like the mountains!” I was so excited that he was associating the shaving cream with other experiences! 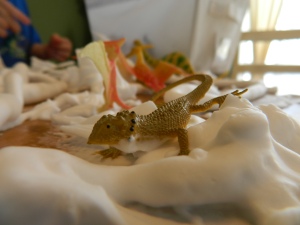 After a while, he decided that he wanted to put his dinosaurs and lizards in the “snow” so I grabbed his basket of lizards, dinosaurs, and frogs. 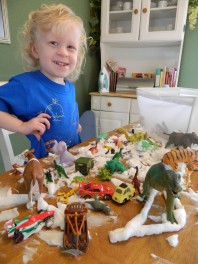 As you can see, eventually more friends showed up for the party. We had tigers chasing cars through the snow, dinosaurs hanging out with cows, and lizards building snowmen {using the cotton balls of course}. I’ve never seen his imagination so active. It was so much fun and so encouraging and exciting. I took dozens of adorable pictures and carefully journaled all of his precious observations and exclamations as he busily played.

When our play was over, I simply wiped down the table with a wet rag and tossed the toys in the bathtub. It was actually one of the easiest clean up jobs yet. I absolutely loved this activity, because even though it wasn’t exactly what I expected, he took charge and that’s so impressive and fun.

Filed under Activities, Creative Ideas and Crafts, Learning at Home