Horror films are a secret guilty pleasure of mine. I’m guessing most people upon meeting me would have no clue how much I love a good fright flick. I don’t seem like the kind of girl who gets her kicks from a good Hannibal Lecter marathon. But oh how I do. Oh yeah, I’m dark.

Of course, there’s my list of top Halloween films, and then there’s the list I’d let Little watch. The two couldn’t be more different from each other. I thought it’d be fun to share my adults-only horror list {and it was hard to narrow down} as well as my for-the-kids list.

Let’s start with films to enjoy with your little ones, shall we? 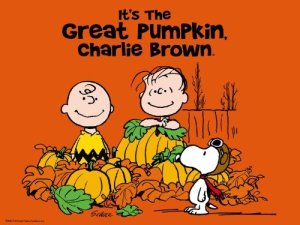 First on my list is “It’s the Great Pumpkin, Charlie Brown.” This is the classic story from the characters created by Charles Schultz. I’m pretty sure 99% of us have seen this flick at one time or another. Sweet Linus {my favorite} waits for a magical Santa-esque character he calls the Great Pumpkin. And who can forget Charlie Brown’s epic fail of a ghost costume? No spookies, just fun in this one. 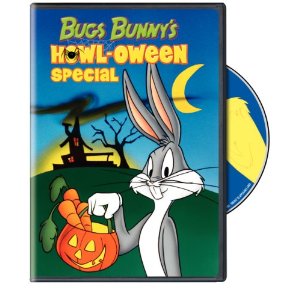 Next is “Bugs Bunny’s Howl-Oween Special.” This DVD contains the classic cartoons of the witch in the woods who attempts to make rabbit stew out of a bewildered Bugs, and the giant red hairy guy {monster?} who’s always fun to watch.

Disney and Pixar’s “Monsters, Inc.” is easily one of Little Bug’s favorite movies. He can’t seem to get enough of Sully {voiced by John Goodman}. He LOVES this movie. It isn’t spooky or scary, but the monster theme works great for a Halloween flick!

Veggie Tales’ “Where’s God When I’m S-Scared?” is a great movie for little ones who might be spooked by the frights of Halloween. It has all of the friendly Veggie characters including Bob and Larry, as well as the fun song “God is Bigger than the Boogy Man.” The movie offers a lesson in handling fear. I love when Junior’s dad tells him that fear is not a spirit from the Lord, but rather God gives us courage. Good stuff.

{In no particular order}

A classic recommend would hands down go to:

Alfred Hitchcock’s “Psycho.” This timeless 1960 classic will give you the eeks every time you pass by an old motor hotel. Some of the techniques we now consider cliche in horror films got their start in this groundbreaking film.

My favorite scare-your-pants-off movie has to be:

Tim Burton. This guy definitely has a hand in all things Halloweeny and just down right creepy. He sure knows what he’s doing though. I wouldn’t classify these films as particularly frightening, but all are certainly disturbing. And at times a bit gross. But oh how I love these movies.

When you combine a Stephen King novel with super creep-out director Stanley Kubrick, you get a classic horror film staring Jack Nicholson. “The Shining” tells the tale of a husband/writer suffering from writer’s block who heads -with family in tow- to upstate Maine {a favored location of King} to watch over a sprawling resort in the wintery off season. Things go horribly awry when Nicholson becomes possessed with someone…or something that looms within the estate.

For a fun guilty pleasure watch, I have to mention M. Knight Shyamalan’s “The Sixth Sense.” 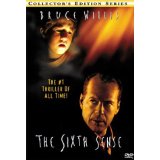 Sure, the famous reveal scene has become a cliche catch-phrase for today’s generation, but that doesn’t take away from the fact that Shyamalan’s big shockers have completely shaken up the horror movie world. Not to mention the fact that this is still a great performance by Haley Joel Osment. And, of course, there are some fun bump-in-the-night moments along the way.

Tis’ the season for turning out the lights and watching a frightening flick! So bust out that DVD collection and have some fun!

Have a Wicked Weekend,